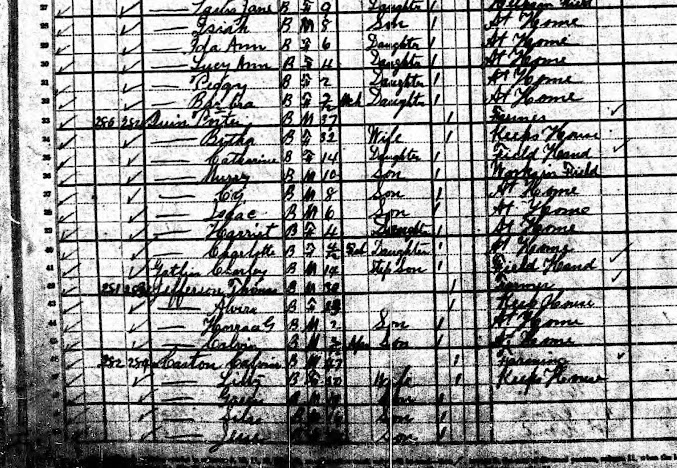 Lydia was an enslaved black woman born in December 1825 in Mississippi and died July 5, 1916, in Pike County Mississippi. Lydia had offspring from two men with Brumfield and Caston surnames.   Enslaved individuals were not allowed to marry. Some of her children were born before Emancipation Proclamation in 1863 which freed the enslaved in southern states. 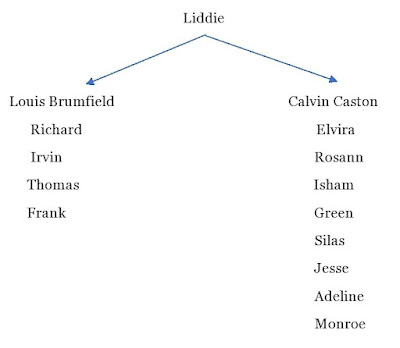 Her first consort Louis Brumfield was identified from the death certificate of her son Richard Brumfield born between 1841 and 1843.  Louis is thought to be an enslaved black man.  What ultimately happened to Louis is presently unknown at this time.

Lydia Caston was identified as the mother of Thomas Brumfield on his death certificate.

Irvin Brumfield was born on August 13, 1844,  died on August 27,1900 and Frank Brumfield's death certificates have not been found. Identification of Frank Brumfield is pending.  Autosomal DNA analysis and genealogy research of descendants of Richard, Irvin, and Tom Brumfield have correlated a familial relationship.  The Brumfield children may have different fathers. DNA "Y" chromosome analysis of male descendants is pending.
Her second husband Calvin "Cad" Caston has been identified through the census, vital records, and his will in previous blog posts. Lydia has been identified by her descendants as Liddie Brumfield Caston.

Henry Sims Brumfield born Feb 5, 1835- Dec 5, 1915, has been identified as the former slave owner of Richard Brumfield Liddle's son. Henry Sims Brumfield was the son of Jesse Kelly Brumfield who was born in York District, South Carolina Mar 12, 1807-July 25, 1884.  They moved to "Love Plantation" near the Bogue  Chitto River south of Holmesville which was previously settled by William Love in 1809. William Love 1758 or 1765 -1839 was born in South Carolina.  The plantation was passed down to Henry Sims. Jesse Kelly Brumfield in 1856 moved to the "Brumfield Plantation"  3 miles east of Liberty Amite County, Mississippi residing to his death.  In the 1860 Pike County, Mississippi slave census enumerated 62 enslaved individuals for Jesse Kelly and 12 individuals for Henry S Brumfield.    It can be inferred that Henry Sims or his father Jesse Kelly were the probable owners of Liddie, Louis, and Calvin.

Details concerning how Calvin and Liddie Caston become owners of 80 acres of land in Pike County and information about  Richard, Irving, Tom,  Frank Brumfield,  Elvira, and Rosann Caston have been given in prior blog posts. Liddie continued to maintain the family home with Calvin.   Calvin died July 19, 1912.   In his will, he appointed Silas Caston to be Lydia's guardian without bond.    Lydia continued to live on their land until her death on July 5, 1916, at 90 years old. 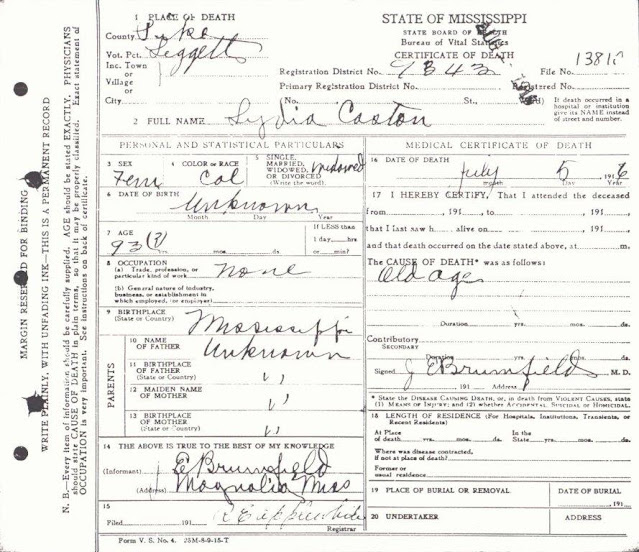 After the death of Liddie, the homestead land still had her name on the deed. A notice for the sale of land for taxes for Pike county, Mississippi was published in the newspaper on the first Monday of July, 1931. The sale of land was to be on the Magnolia court house for cash for unpaid taxes. Property with Silas and Lydia Caston's names is listed for sale.
Taxes were paid in 1931.  On the third Monday in September, 1935 property with Lydia Caston's name is listed for sale for outstanding unpaid taxes.  I have not researched land records to determine the present land ownership.

For many, Memorial Day is considered the first day of summer a time to celebrate with family gatherings, shopping, cookouts, and vacations. It is however a solemn day.

Memorial Day was established as a United States federal holiday to honor those who made the ultimate sacrifice and died while serving in the military.  "The   National Moment of Remembrance" ask all citizens to have one minute of silence at 3 PM local time in tribute.  Taps Across America will be played for the third year at that time.

Today is the tenth anniversary of  my blog.  Ten years ago I decided that my family and related families which I call the branches had important histories.  I have made 126 blog posts.  My genealogy research journey of my ancestors have given insight into their lives and the history of this country. I have found many ancestors'  lives were intertwined with families in the same geographic area. I have many cousins. My cousins have  travelled the research journey with me.

Through the years there have been family reunions which assembles the branches and generations together. The reunions continue  this year with the Brumfield, Caston, Nichols and Washington families.  Much fun is anticipated. More family stories will be gathered together for the research to continue. T-shirts of past  and future reunions.

Posted by Tree Gardener at 6:00 AM No comments:

I have identified three individuals who might be a child of Liddie. There is the possibility of a fourth unidentified person.

Assumptions that have been identified concerning Richard, Irvin, Tom, and Frank Brumfield:

1. They all are brothers and have the same mother Liddie and father Louis.

2. The brothers have the same maternal autosomal DNA.

3. The brothers lived in the same geographic area during most of their lives.

4. Genealogy research of Frank Brumfield and his family tree is available and accurate.

5. All the brothers had descendant children.

6. Results of most of the brothers' descendants' DNA are available.

I have not been able to definitely find Frank Brumfield son of Liddie at this time. I will continue using the genealogist toolbox I have developed for research. I will also continue to look for more tools.

Posted by Tree Gardener at 6:00 AM No comments:

Tree Gardener
The Tree Gardener is the nom de plume of Nona L. Edwards-Thomas MD. I am a board certified Obstetrics and Gynecology physician and a self-elected family historian. I have been involved in genealogy research for over 25 years. Through the years, I have attended many genealogy conferences, libraries and have memberships in genealogy groups to increase my knowledge. The first tree that I began my initial investigation was the black African American Brumfield family of Pike County, Mississippi. From this research, it has guided me to other branches of the Brumfield tree and neighboring trees. No family lives in isolation having friends and neighbors whose lives intertwine together which shape personal history. I have included other family trees on my research journey which have had an influence on my ancestors and me. My personal goals are to learn about the history of the United States, meet family members, share information, tear down brick walls and include others in my research journey. To contact me leave a comment on any post

Brumfield Genealogy and other branches and trees

This work is licensed under a Creative Commons Attribution-NonCommercial-ShareAlike 3.0 United States License.